American by the numbers: A Field Guide to the U.S. Population

Is demography destiny? Corporate marketers and government agencies act as if it is, producing mountains of statistics about Americans--most always remarkably inaccessible and dry. Now, America by the Numbers puts the power of demography back in the people's hands, collecting and clearly explaining a vast amount of population data in easy-to-read, informative tables and graphs. From the new immigration to the aging of America, this guide reveals how the ebb and flow of population shapes every public and private decision we make.

In an engaging and accessible form, America by the Numbers ranges across the U.S. landscape as it offers the latest facts about racial conflict, class division, health, schooling, family life, crime, and political participation. The most recent in The New Press's highly successful popular guides to politics and economics--including The Ultimate Field Guide to the U.S. Economy and Social Stratification in the United States--America by the Numbers is both a practical reference to U.S. population trends and a probing examination of the roots of America's most pressing problems.

In America by the Numbers you will learn:

William H. Frey is a demographer on the faculty of the University of Michigan Population Studies Center and founder of SSDAN. Bill Abresch and Jonathan Yeasting are associates of SSDAN.

Sales Information: To order America by the Numbers visit The New Press or Amazon.com. 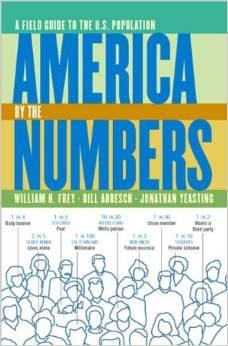